In general, dampwood termites are bigger than subterranean termites; they are the largest of all termite species.  The "swarmers" (flying termites) can be over an inch with their wingspan.  Due to their increased size, they are able to destroy wood much more easily and at a faster rate than their underground cousins.  Dampwood termites, as their name would suggest, look to stay in areas with a high moisture content.  An example of a common dwelling area would be near a tree or a decaying shed.  Also, if there's wood rotting close by, they can be found there too.  They are not common in the Northeast, but they do exist here.  Their primary locations are Florida, Hawaii, and the western states, such as Washington, Oregon, and California.

In contrast to their close relatives, drywood termites are much less common.  They are found in the Southern states, where it's more likely to find wood with a lower moisture content.  The most prominent hiding spot for these pests is an attic, but they will attack trees, fences, and other forms of dry wood as well.  The colonies created by these insects are usually only built up to population of a few thousands, instead of millions like some other species of termites prefer.  Their smaller size leaves them subject to more predators, such as birds, reptiles, and ants, their main concern.  The summer months bring the infamous termite swarm and infestation common to warmer climates.  One of the unique things about drywood termites is that it's relatively easy to identify a problem because you'll see a termite dropping or two.  This fecal matter help the environment, but it certainly is not what you want in your house. 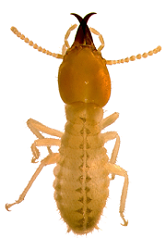 Formosan termites are a major annoyance that originally spread from China to Taiwan to Japan and finally to the US.  This species of termite can found in the Southern states because of their inclination toward warm climates, but there are some that have ventured all the way to the Finger Lakes.  Formosan subterranean termites are the most destructive of their species simply because of the size of the colonies they build.  Millions of subterranean termites converge on a chosen location and build out complex paths and underground structures, taking up hundreds of feet of space.  We hope that there is no wooden structure near a colony of Formosan subterranean termites, because it probably won't last long.  These pests can chew threw high quantities of wood in a very short period, which poses a severe threat to any wood within range, even your home.

Subterranean termites are an interesting species.  Their colonies are built underground by the workers.  While some are digging tunnels, others are out scouting for food sources.  When food is found, the scouting soldiers communicate back to the workers using chemical and pheromone messages to request a team.  A group of workers suddenly approaches to take as much food as they can carry for the colony's supply.  On occasion, separate groups of subterranean termites come into contact with one another and end up fighting over land.  Sound familiar to humans?  They employ advanced tactics to block off tunnels and construct diversions, even sacrificing their own bodies for the good of their colony.  Wood is the primary food source, but young plants are susceptible to attack as well.

Conehead termites originated in the Carribean islands and were brought to the United States in 2001.  They are easily identified by their beige colored body and Hershey-kiss shaped head.  Their antennae are longer than other species and like the rest, they have 6 legs.  Their living quarters are either in a nest, underground, in a tree, or in a wood structure.  They build tunnels underground, and when it's time to find food or overtake a new location, they come above ground and swarm the area as one unit.  An army of conehead termites can do serious damage to nearby wood and other insects that get in the way.  The diet of a conehead termite consists of trees (dead or alive), sticks, branches, bushes, wood, and anything made from cellulose.  This species is easily mistaken for another subterranean termite type, so it's best to call the pest control service to analyze the problem.

Various websites on the Internet promote the idea of termite spray or do it yourself (DIY) termite control, but 99% of the time these methods do not reach the core of the problem because the nest remains unaffected.  Trust the experts at Albany Pest Control to handle termite removal effectively.  They'll perform an in-depth inspection and recommend an appropriate treatment to take care of anything from a small colony to an infestation.  Call now at (518) 444-5760.