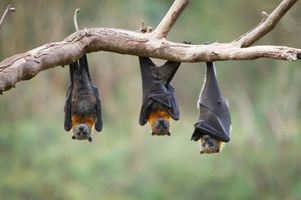 ​Bats roosting in the vents and attics of homes and commercial buildings can be more than an annoyance.  In sufficient numbers, bats can cause serious damage. They can also represent a significant health hazard, particularly in businesses that serve food to the public because these flying mammals carry diseases and their droppings give off poisonous odors. If you're looking for a safe and effective way to control your bat problem, call (518) 444-5760 to speak with one of our experts about bat removal in Albany, NY.

Pest exterminators recognize that bats are themselves effective pest controllers – helping to minimize mice and insects near populated areas. As such, America’s bats are a valuable resource that must be protected. For this reason, the poisoning of bats is largely banned throughout the United States, and the abuse of such laws are on the decline. And even apart from the laws, most homeowners these days are themselves concerned about the environment and protecting wildlife. While some use lethal traps to get rid of bats, we do not.  We use humane methods only.

Below are some bat control techniques currently being used by pest control companies:

Glue Traps
There are many kinds of traps that can be used to kill bats. One of the most effective is a glue board attached to a location where the bats regularly crawl into an out of the colony. The bat will then become stuck on the glue board and will eventually die – although it’s an unpleasant death that may take some time.

Body Grips
A body grip trap can kill a bat much more quickly than a glue board, but it’s not as effective. This device has a mechanism that grabs the body of the bat and crushes it to death when the bat triggers the trap. Even seemingly safe and harmless cage traps can sometimes kill bats since their echolocation won’t detect the cages wire mesh – causing them to bash themselves into it.

Poison
As mentioned above, in most localities in the United States it is illegal to poison bats. However, in those locations where it is still legal poison is sometimes still used. The real challenge when trying to poison a bat is convincing the bat to consume the poison. Bats principally eat flying insects, which makes it extremely difficult to poison their food source.

​Fumigation
While fumigation can sometimes be used to eliminate bat colonies in attics and buildings, these approaches can also produce their own problems. Just sealing off the part of your property the that needs to be fumigated can be difficult. Again, in many cases fumigation is illegal. And there’s also the fact that bats facing fumigation will try to escape into the main part of the home or building, sometimes resulting in significant damage.

The simple fact is that bats can be better dealt with using more humane approaches. These alternatives to lethal traps and poisons will not only achieve better results, they will do so without creating the additional problems that result from killing off bats. The lethal methods described above often require coming into physical contact with dead or dying bats. This can represent a significant threat, requiring the worker removing the bats to where a breathing mask and protective clothing.

By using bat exclusion techniques – which are often more effective and much simpler – you’ll find you will be able to complete the bat removal process without killing them. This means that they will remain in the area consuming mosquitoes, wasps and other insects that can swarm your home or business without the insect eating bats there to take deal with them.

One of the first steps in getting rid of bats and their colony in a home or commercial building is to determine exactly how old they are getting in to the building and how they are leaving. Then exclusion netting or funnel can be used to remove them. It’s essential to ensure that all the entry points are found and sealed. Otherwise, the bats will simply return at some later date. Funnels are designed to permit bats to leave via a hole. But they don’t allow them to come back in. For large entry holes, it’s best to use exclusion netting which also allows them to leave but doesn’t allow them to come back.

An important point to keep in mind during the bat removal process is that protective gear and clothing – including a breathing mask – are essential. Bat droppings contain bacteria that can be extremely dangerous for humans. This cleanup means collecting and removing these droppings – which can be a considerable quantity if you’ve had to get rid of a large colony of bats that have been living with you for a long time. Any insulation material contaminated with bat droppings will also need to be removed and replaced. Decontamination of the area is the final step. Given the equipment and knowledge required to effectively carry out this process, it’s best left to experts.  Interested in learning more about these mysterious creatures?  Read out bat facts here.